I had not been to Rome in about fifteen years, so when a high school friend, Cindy, let me know that she would be taking a trip to Tuscany and Rome and that it would overlap some of the time that I was to be here, I was open to go spend a few days in Rome at her invitation.

Cindy shares my crazy obsession with Italy, and she has been here many times and has good friends here.  Another high school friend of mine was along with Cindy–Lisa .  Lisa and I actually attended art school together for a year back in 1981. It has been great to spend time with Lisa and Cindy, because between the two of them, they share my two greatest passions.  Cindy is passionate about Italy and Lisa is passionate about art!

We met in the Piazza Navona last Monday afternoon. It was strange and wonderful to see friends that I had not seen since we were all 17 or 18 years old-and in of all places, Rome, Italy.

Since I had not been to Rome in so very long. I did not remember it in totality. Being me, I remembered the museums more than I did the city itself. I remembered many of the fountains and piazzas. The most famous fountain-and one of the most famous in all the world–the Trevi, was under total renovation and we were unable to view it. The renovation is costing 2.2 million euros. The Italians have so many irreplaceable treasures to restore and care for. Despite their tough economy, they find ways. The Trevi is the fountain that holds the legend that if you throw a coin over your left shoulder with your right hand, you shall return to Italy. Good thing I did that on my first trip to Rome!

I have been so very comfortable in and familiar with Florence and the smaller Tuscan cities on my past two years in Italy, that Rome overwhelmed me.  It is so beautiful, but so grand and “untouchable” to me in comparison to Florence.

I loved my time in Rome.  I have never been one to be attached to familiarity, but for some reason, that is exactly what I feel in Florence.  Familiarity-and it is good. Rome captivates me, but Florence embraces me.

We did much in a few days in Rome, but of course, not enough.  My favourite event of my two days in Rome was a revisit to the Museo Borghese. The Borghese is one of the most beautiful museums in the world.  It, like most high points in Rome and Florence, requires reservations in high season, and often presents long lines before the opportunity to view the works amongst a crowd.  Those crowds often consist of many tour groups which “take over” the museum and make it difficult for independent travelers to have at least a decent view, and more difficult– a genuine experience of the art.

That is the beauty of traveling off-season,  The weather may not cooperate at times, but there are no lines and the absolute joy and privilege of seeing great works in beautiful surroundings without the buzz and distraction of crowds and of tourist groups is a wonderful experience.

I am more a fan of Renaissance art than of Baroque, but Bernini was a genius and this piece is impossible not to love and be awed by.

The myth of Apollo and Daphne is this:

“Daphne was Apollo’s first love. It was not brought about by accident, but by the malice of Cupid. Apollo saw the boy playing with his bow and arrows; and being himself elated with his recent victory over Python, he said to him, “What have you to do with warlike weapons, saucy boy? Leave them for hands worthy of them, Behold the conquest I have won by means of them over the vast serpent who stretched his poisonous body over acres of the plain! Be content with your torch, child, and kindle up your flames, as you call them, where you will, but presume not to meddle with my weapons.” Venus’s boy heard these words, and rejoined, “Your arrows may strike all things else, Apollo, but mine shall strike you.” So saying, he took his stand on a rock of Parnassus, and drew from his quiver two arrows of different workmanship, one to excite love, the other to repel it. The former was of gold and ship pointed, the latter blunt and tipped with lead. With the leaden shaft he struck the nymph Daphne, the daughter of the river god Peneus, and with the golden one Apollo, through the heart. Forthwith the god was seized with love for the maiden, and she abhorred the thought of loving. Her delight was in woodland sports and in the spoils of the chase. Lovers sought her, but she spurned them all, ranging the woods, and taking no thought of Cupid nor of Hymen. Her father often said to her, “Daughter, you owe me a son-in-law; you owe me grandchildren.” She, hating the thought of marriage as a crime, with her beautiful face tinged all over with blushes, threw her arms around her father’s neck, and said, “Dearest father, grant me this favour, that I may always remain unmarried, like Diana.” He consented, but at the same time said, “Your own face will forbid it.”

Apollo loved her, and longed to obtain her; and he who gives oracles to all the world was not wise enough to look into his own fortunes. He saw her hair flung loose over her shoulders, and said, “If so charming, in disorder, what would it be if arranged?” He saw her eyes bright as stars; he saw her lips, and was not satisfied with only seeing them. He admired her hands and arms, naked to the shoulder, and whatever was hidden from view he imagined more beautiful still. He followed her; she fled, swifter than the wind, and delayed not a moment at his entreaties. “Stay,” said he, “daughter of Peneus; I am not a foe. Do not fly me as a lamb flies the wolf, or a dove the hawk. It is for love I pursue you. You make me miserable, for fear you should fall and hurt yourself on these stones, and I should be the cause. Pray run slower, and I will follow slower. I am no clown, no rude peasant. Jupiter is my father, and I am lord of Delphos and Tenedos, and know all things, present and future. I am the god of song and the lyre. My arrows fly true to the mark; but, alas! an arrow more fatal than mine has pierced my heart! I am the god of medicine, and know the virtues of all healing plants. Alas! I suffer a malady that no balm can cure!”

The nymph continued her flight, and left his plea half uttered. And even as she fled she charmed him. The wind blew her garments, and her unbound hair streamed loose behind her. The god grew impatient to find his wooings thrown away, and, sped by Cupid, gained upon her in the race. It was like a hound pursuing a hare, with open jaws ready to seize, while the feebler animal darts forward, slipping from the very grasp. So flew the god and the virgin- he on the wings of love, and she on those of fear. The pursuer is the more rapid, however, and gains upon her, and his panting breath blows upon her hair. Her strength begins to fail, and, ready to sink, she calls upon her father, the river god: “Help me, Peneus! open the earth to enclose me, or change my form, which has brought me into this danger!” Scarcely had she spoken, when a stiffness seized all her limbs; her bosom began to be enclosed in a tender bark; her hair became leaves; her arms became branches; her foot stuck fast in the ground, as a root; her face became a tree-top, retaining nothing of its former self but its beauty, Apollo stood amazed. He touched the stem, and felt the flesh tremble under the new bark. He embraced the branches, and lavished kisses on the wood. The branches shrank from his lips. “Since you cannot be my wife,” said he, “you shall assuredly be my tree. I will wear you for my crown; I will decorate with you my harp and my quiver; and when the great Roman conquerors lead up the triumphal pomp to the Capitol, you shall be woven into wreaths for their brows. And, as eternal youth is mine, you also shall be always green, and your leaf know no decay.” The nymph, now changed into a Laurel tree, bowed its head in grateful acknowledgment.

The statue is so delicate and unbelievably fragile looking.  I have been told that the leaves that come forth from Daphne’s fingers actually chime when tapped, like fine china.  And this is marble.

My second favourite piece in the Borghese is Antonio Canova’s Paolina Borghese Bonaparte (!805-1808). 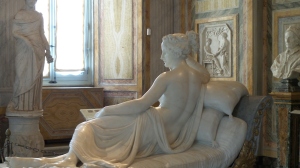 Paolina is also exquisite.   I show her here from only one angle, but she is beautiful from every angle.  I took this photo in the afternoon light and she glows.  I was blessed to get photos of both her and Apollo and Daphne with no people in the background.  That is a rare gift.

I love both of these pieces and the photos that I was able to get and that I share with you here.

1 thought on “Two Days in Rome”