I find myself once again in beautiful Florence, this time being somewhat of a “bonus” trip thanks to an American friend of mine,  who returned to Florence to continue work on a painting, and has been kind enough to share the rented apartment here,

This American friend, who I met in Florence two years ago and saw again last fall, is working on an oil painting here. Despite never having painted before, now, in retirement years, my friend is taking on the challenge. And a challenge it is to paint a copy of Leonardo da Vinci’s “Leda and The Swan”. “Leda and The Swan” is also known as “The Lost Painting”. It is one of history’s great art losses. It is not known what happened to the painting nor how it disappeared.  Leonardo started the painting around 1503 in Florence.  It was recognized as a masterpiece and, therefore, was copied by most of the painters in Florence at the time.  Even Michelangelo did his own version.  Hence, there are many versions.  The one that my friend is copying is considered to be closest to the original and most in da Vinci’s style and technique and closest to his sketches still in existence. 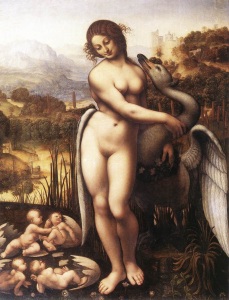 One can easily imagine that this would be a challenge to copy!

This is the print of Leda on the left and my friend’s progress on the copy on the right.  Wonderful!

The painting’s title “Leda and the Swan” is based on a Greek myth. In the myth the god Zeus comes to Leda in the form of a swan and seduces her.  She bears two eggs from which hatch four human children, one of which will be the most beautiful woman in the world, Helen of Troy.  I guess you have a good chance of being beautiful if your father is a swan!  Strangely enough, the theme was popular in the sixteenth century because it was considered more appropriate to depict a woman in the act of copulation with an animal than with a man.

Leonardo da Vinci’s “Leda and The Swan” was not only often copied, but it was also often documented and written about.  The painting was last accounted for in 1625 when it was located in France at the Chateau Fontainebleau.  No one knows what became of it after that.  Some romantics believe that it still exists somewhere, but chances are that is destroyed and gone forever.

“Leda and The Swan” does live on, however, in the many copies and in the fact that, even today, my friend is honoring it by creating a copy.

So, thanks to the kindness of a friend and to Leda, I am lucky enough to be here in Florence again in this lovely springtime.

When I arrived at the airport in Florence, it dawned on me that I had not packed The Map.  I had never even thought about packing it this time around.  The Map has been my companion for three years during my stays in Florence. It is compact, laminated and I know it like the back of my hand.  The first year I was here, I remember wandering very far north.  When I looked at The Map to get my bearings I could not find the street that I had wandered onto. All of a sudden I said to myself “Oh no, I walked off the map!”  I laugh about that to this day.

Although I have needed the map less and less over the years, The Map is rather a security blanket for me.

My Security Blanket, The Map,,, 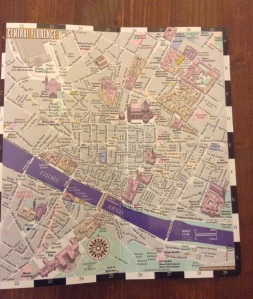 The fact that my packing list did not include The Map was a bit of a surprise.  I cannot imagine traveling without a map to any city that I am going to walk extensively in. It kind of made me happy that I was feeling so comfortable and at home here that I had forgotten The Map.  Be that as it may, I still am apt to get lost here from time to time.  I can always wander until I see something I know, but I am not quite comfortable without my security blanket map.

So I purchased a map at the airport.  It seemed acceptable, but when I opened it at the apartment, it was about 2 1\2 X 3 feet.  No way was I going to stand on a corner in Florence, Italy trying to manage and read a billboard size map!  Luckily enough I found a new The Map at a bookstore.  I was rather ridiculously happy to find it.

I have The Map now,  and am secure and prepared to roam the streets of Florence, discovering new places and things and getting reaquainted with known ones.  The Map and I are going to have another wonderful Florentine adventure, and hopefully I will see the beautiful “Leda and The Swan” completed!

1 thought on ““The Lost Painting” and Forgetting the Map”